Technologies Software Development Python
According to Stack Overflow’s Developer Survey of over 65,000 developers, Python ranked as the third most loved technology, falling just behind TypeScript and Rust. You might be wondering – what makes Python the popular solution it is today? Given the rise of new languages and frameworks, is it still worth investing in Python development?

In the following article, we will discuss the benefits of Python app development, its common use cases, and why technology is still one of the most popular choices for web apps.

Let us start with a question:

Why is Python popular in software development?

If you’re wondering why the language tops the technology popularity charts, here are some of the reasons:

As the StackOverflow study shows, Python is not only one of the most popular technologies but is also identified as the most wanted language. Many programmers plan to start programming in Python, which indicates that they see a bright future in it. / source: https://insights.stackoverflow.com/survey/2020

Below, we shed light on some of the specific advantages of Python application development.

Here are the main benefits associated with Python app development.

Low barrier of entry – Python, to a great extent, resembles English, which makes learning the language fairly easy. It can be quickly picked up even by less experienced software developers.

Good data visualization – programmers can take advantage of various plots and charts to depict data in a format that is easy to understand. Companies that specialize in Python software development have access to different Python libraries such as Matplotlib that help them visualize data and build clear reports.

Python is simple to read, so programmers can easily comprehend each other’s code. Not only does it speed up work, but it also has a positive impact on cooperation with fewer mistakes made along the way.

Another benefit of Python web app development is the easiness to scale. It’s hard to predict when your user base will start increasing significantly. However, you have to be ready for a spike. Applications written in Python are easily scalable. No wonder brands like YouTube, Reddit, or EVE Online chose this language to build their solutions.

As Python is easy to learn the language, and it’s simple to use, which minimizes bugs’ probability, it translates into faster web app development. This, in turn, speeds up the return on investment.

Python has many pre-built libraries, including Django, Pyramid, Flask, Turbo Gears, and others. There is a library for everything from scientific computing, data processing to machine and deep learning – this significantly simplifies web app development.

Fast prototyping can be definitely regarded as one of the primary benefits of python application development. You can achieve more with less coding, meaning you can build prototypes and test your ideas faster than if you built them using any other language.

Python is increasingly important in our projects. This is especially true in the financial industries, based on data analysis and machine learning. We expect that Python will have more and more significance in the development of web applications. Therefore, we systematically increase our team of Python engineers. Paul Jackowski CEO ASPER BROTHERS

6. Python is open-sourced & has a large community

Python is an open-sourced technology, which entails several advantages. Firstly, it means that users can modify it freely to meet their specific needs and project requirements. Secondly, the future of the language lies in the hands of the entire Python community. Developers from all over the globe contribute to the language to keep it up-to-date and make sure that it addresses various use cases. To demonstrate how popular the language is in the tech community, it’s worth looking at Stack Overflow – as of late-2020, there are nearly 1.6 million questions tagged with “Python” on the platform.

Industries and Fields where Python is Extremely Useful

One of the most common use cases for Python is web app development due to its security, ease of use, and scalability. It offers a wide variety of frameworks, including Django and Flask, which contribute to quick app development. Thanks to Django’s dynamic development capabilities, Python is the perfect solution for building web applications. How so? It includes a plethora of standard libraries, through which you can significantly cut the time it takes to build products. This, in turn, reduces time-to-market. 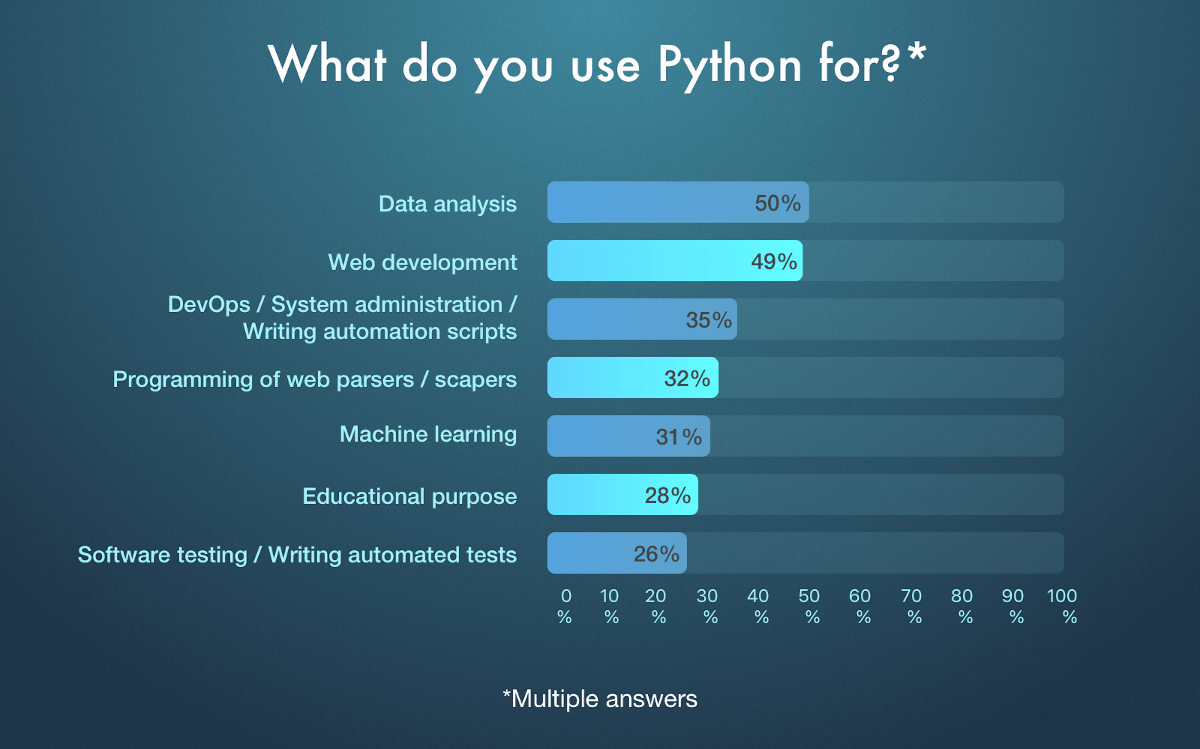 Python is an extremely universal language, which is used in a growing number of industries. / Source: cleveroad.com

Throughout the years, Python has also become a mighty AI and Machine Learning technology. It allows developers to run complex tasks needed for AI and ML modelling and is applied for processes such as image recognition, data processing, and advanced computing. Python is likely to remain the technology of choice among the Machine Learning community for many years to come. It features a variety of useful libraries, including TensorFlow, SciPy, and Pandas.

Python leads the way in FinTech, which should come as no surprise. Finance is an industry that started to put more emphasis on technology rather than traders. Some of the biggest banks, like Bank of America, worked tirelessly to switch from legacy code to Python. There are a few reasons why this language is the preferred option in Fintech:

Python has become very popular in the financial industry. It is ideal for analyzing large data sets and machine learning in FinTech applications. / Source: hackerrank.com

There are a few reasons why Python application development is popular among startups. Firstly, Python is the perfect blend of stability and innovation. It has a big developer community, which means the technology will be developed for years to come. Python is also scalable, which means it works efficiently as the startup grows. Next, as mentioned earlier, it has an easy syntax. With less code needed to achieve a specific result, it means it will take less time and resources to launch the MVP. Lastly, startups choose Python due to its in-built security features. For instance, Python’s Django framework hides the source code, protecting it from unauthorized access.

Examples of Companies and Apps based on Python

With the above benefits clearly laid out, let us now look at how Python is used for app development. Below are a few examples of how companies leverage the technology for their web application development.

Stripe is a Fintech startup that enables companies to finalize payments via the web. The brand is viewed as one of the most spectacular examples of Python web applications – they incorporated APIs into mobile and web apps. Many Fintech businesses, including Stripe, opt for Python as it effectively handles financial tasks, including calculations and data analysis. Financial specialists can also be fairly easily understood as it bears a close resemblance to the English language.

Stripe bet on Python, and it seems that they won on this decision. / Source: Stripe.com

SurveyMonkey is another application written in Python. They are one of the world’s leading survey companies. As of late-2020, the company claimed that they handle over 20 million answers to questions each day. With such a volume of data, the survey software needed an efficient way to analyze their clients’ data. As disclosed on the Python Foundation website, originally, SurveyMonkey operated on a “monolithic C# .NET application”. This solution worked well for years until a certain point when the company realized its solution was prolonged when adding and testing new features. For this reason, SurveyMonkey decided to rewrite its core features into Python. The shift from .NET paid off, and the survey software can now handle heavy traffic without any performance-related issues.

AstraZeneca is one of the biggest global pharmaceutical companies. Drug development is a complex and time-consuming process. To simplify discovering new drug molecules, they came up with software aimed at helping chemists do their job more effectively. It was developed in 2000, and even though the 1st version wasn’t built in Python, one of the software developers quickly convinced the company to switch, giving birth to PyDrone. The language was easy to understand by researchers who lacked programming knowledge and focused purely on their experiments instead of worrying about code correctness. The PyDrone’s codebase included solely 5,600 lines, which, as you can probably imagine, didn’t take long to develop, which was a huge plus.

There are several reasons why businesses invest in Python app development. Firstly, the language is scalable and boasts an active developer community. Secondly, it has an easy syntax, which lets you achieve results sooner, with less code written. Thirdly, many Python frameworks come with in-built security features, which keeps code protected from unauthorized access. These are just some of the benefits we’ve discussed in the above article.

Throughout the years, Python has also become the language of choice among the scientific, Machine Learning, and AI developer community. If you’re considering Python for your web app development solution, these and other reasons speak highly in its favour.

Python is often the best choice for creating a web application. Do you want to find out if it also fits your project? Contact us for a free consultation.

Did you know that Python currently ranks as the most popular coding language in the world?  That’s right – according to...

The brain consists of neurons and weights connecting between them. Machine learning Algorithms follow the same design of brain structure as...