Accident Reporting Solution based on PWA

The client came to us with a general idea and a very wide functional range. The main expectations of the client were to overlay the events on the map and share them.

What we did, in the beginning, was to help him to narrow down the product requirements to an absolute minimum, to focus on the main functions, to validate the product on the market and to build on. As a result, we cut around 60% of its original requirements. We also put a lot of work and grinding into the product design stage to make it better. From the beginning, we lead the client through every stage of the project.

We believe that cooperation can be effective and can be a great adventure of realizing common goals.

I love to work with your team. They are amazing and I feel me in competent hands. They know what to do and help me a lot.
Andrew Kern, Helpicam

The initial idea of the application was to allow to report accidents with their description and pictures/videos. Users should be able to add a comment with pictures/videos to each report, expressing their wish to help as a witness or victim.

How can you do that?

When you open the application, you must register and create an accident report. Then you have to add a description, locations from google maps and photos and videos.

Another person looking through the reports may find the one they witnessed. In such a case, that person shall register and add his or her declaration or evidence to the report. There he or she can write a comment, indicate whether he or she was a victim or witness of the accident and also add photos and videos. After this report, the person who created the original report will receive an e-mail and SMS notification of the new “proof”.

The Helpicam project is based on Google Material Design, a library for UI, which helps to build mobile applications more coherently.

We have received a detailed MoSCoW method with an explanation of what functions an application must have and other functions based on a hierarchy from the most important to the smallest. During the common brainstorming, we agreed on how an application can look like, what additional functions can help the application and the user. Finally, we decided to change the MoSCoW method, checked examples and online benchmarks.

The client provided materials such as logos, fonts and colours. From the first stages, we tested with developers the best combinations of layout, features and user-friendliness. We also had several meetings to conceptualise the client’s idea of using the best technologies and design. Our designer helped the client to revise the original colours and started designing the application following his knowledge of UX/UI and keeping the user-oriented design in mind.

This means that the design is user-centric and changes the way of thinking about people and computers. We wanted the app to be minimal, simple, and fast because the people will use it under stress due to an incident or as a witness of an incident. Red is a very vivid color and it reminds a danger or an emergency, that’s why we used it for the primary elements, like buttons and types of incidents.

Laravel: a solid big community, easy to write and well functioning. With this technology, we were able to meet business challenges and create an application.

React: Solid, big community. The Facebook company is behind the development of this technology and is using it itself, so you can assume that its support won’t end suddenly.

PWA: Allows you to download a version of the site to your phone and use it as a native app, not through a browser.

We used these tools to complete this project 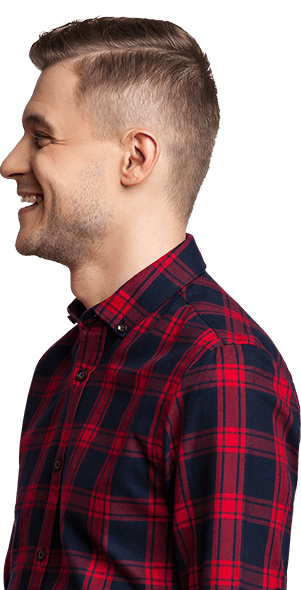 If you’re still in doubt, we will help you find the answers you need.
Just contact us and let’s software together!