Technologies
Machine Learning Python AI
Could you imagine a world with self-driving cars or phones that can tell you out loud what the weather will be like tomorrow? Where software applications learn by themselves without being programmed by a human? Oh, wait, this is already happening – all thanks to machine learning.

Machine learning is the new black in the IT industry! All the cool kids use it – including NASA. They use machine learning to make their spacecraft travel faster and further. The rest of the gang, i.e. Uber, Tesla and Google, also befriended it. There is at least one more thing these companies have in common. They all use python as their preferred language for their machine learning projects. Read this article to find out why.

8 reasons why Python is the preferred language for Machine Learning

The role of machine learning is to recognize patterns in data. A machine learning engineer is responsible for extracting, processing, refining, cleaning, arranging and making sense of data to develop intelligent algorithms. Python is easy to understand. While linear algebra or calculus concepts can be so complex, they take the maximum amount of effort. Python can be implemented quickly, which helps machine learning engineers to validate an idea promptly.

One of the main reasons why Python is the preferred language for machine learning is its access to many libraries. A library is a collection of functions and routines that a programming language can use. Having access to various libraries allows developers to perform complex tasks without the need to rewrite many code lines. Since machine learning heavily relies on mathematical optimization, probability and statistics, Python libraries help data scientists perform various studies easily. Here are some of the libraries you can use with Python:

There is a worldwide deficit of programmers. Python is easy to learn a language – the entry barrier is low. What does it mean? More data scientists can master it quickly, and as a result, they can get involved in machine learning projects. Believe it or not, but Python is very similar to the English language, making learning it easier. Thanks to its simple phrase structure, you can confidently work with complex systems.

Why choose Python for machine learning? Because it offers great flexibility. Developers can use Python along with another programming language to achieve their goals. They don’t have to recompile the source code. Any changes can be made instantly, which makes viewing results fast. Thanks to Python’s flexibility, the probability of bugs occurring is minimal.

An important part of software development is testing. Python for machine learning can run literally on any platform, including Windows, macOS, Linux, Unix, and many, many more! Why it matters? It makes testing a piece of cake, as you can run tests on any platform you like. All your developers have to do is use PyInstaller, for example, to prepare their code to run on different platforms. Using Python for machine learning will save you a lot of time and money!

It’s easy to read Python, so any of the Python developers can easily implement it, copy or share it whenever a change in the code is required.

Using Python eliminates confusion, mistakes, and conflicting paradigms, which increases the efficiency of algorithm exchange, sharing of ideas, and tools between AI and machine learning professionals.

Additionally, there are tools such as IPython offering extra features, including testing, debugging, tab-completion, etc.  It allows for parallel application development, execution, debugging and interactive monitoring.

Python as a programming language is
easy to understand and the best choice to start programming.
It has many modules that can be fastly used for machine learning.
The best thing I like is that you can optimize your models smoothly
and have fun, because that’s what keeps you going Dominik Kolasa Python Development

Python is becoming the most popular programing language in the world. Thanks to its simplicity, versatility, and easiness, to maintain, Python is the programming language of choice for many well-known brands, including Facebook, Google, Quora, Amazon, Netflix, to name just a few.  It’s frequently used in some of the most exciting and innovative technologies, including machine learning, artificial intelligence, and robotics.

What’s more, Python is in high demand at universities, becoming the most popular introductory language. It’s also frequently learned by experienced developers who want to build on their skill portfolio. The more firms and people use Python. More resources are created around it, helping developers with complex tasks without experiencing coding problems.

Python has a strong group of supporters, and it’s worth knowing that if you experience a problem, there is someone out there who’ll be able to offer you a helping hand. Python is an open-source language – this indicates there is a wide pool of resources that can be used by beginners and pros alike.

Python documentation is available online, and many frequently occurring issues are discussed in Python forums and communities. If you have a problem that you cannot resolve on your own, you can always pose a question and count on other developers to help you out.

Python is undoubtedly the best choice for machine learning. It’s easy to understand, which makes data validation quick and practically error-free. By having access to a widely developed library ecosystem, developers can perform complex tasks without extensive coding. Thanks to its versatility, testing can be performed easily; tests can be run on any platform, including Windows, macOS, Linux, Unix, among others.

Python is becoming one of the world’s most popular programming languages, picked up by newbies and pros alike. It’s growing popularity means it’s going to be easier to recruit developers having the right competencies to get involved in machine learning projects.

There is a wide community of Python supporters where knowledge is easily accessible is willingly shared. Answers to a lot of problems can be found in Python forums and communities. If you want to know more, don’t hesitate to ask us! 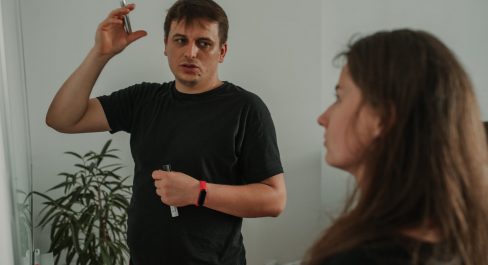 Let us start with a question: Why is Python popular in software development? If you’re wondering why the language tops...

The real estate industry is one of the oldest and most prominent ones still on the market, but it’s also...