Career Change to Software Engineer. From non-tech to Developer

Brotherhood Team Career
Since the beginning of ASPER BROTHERS more than 10 years ago, we have known that the team is one of our company’s most important values. And the more various the better! With years passing by and our company developing, we worked with a lot of original people, which helped us to realize that the academic background is a big advantage when it comes to hiring people, but it’s not the crucial one.

As you probably already know, I’m not really into theorizing – I prefer real-life examples instead of dry facts. In March, we hired a Front-End Developer. His story is so interesting, that I asked him if it’s OK to share it here.

From creating the videos to creating code

Grzesiek studied at Film School in Łódz and after the 2nd year his life goal came true – one of the biggest Polish TV companies offered him a great cameraman contract that he couldn’t refuse. After a few years of a comfortable life, he had an accident on the set. And everything turned upside down, as he couldn’t work as a cameraman anymore due to his condition. When he got a little better, he decided to start a company – his team was filming and photographing weddings.

But as it often happens – when you run a company from home, you can feel pretty isolated from the outside world. And it happened to Grzesiek, but he decided to ignore his discomfort in order to provide a good life for his family. One day, during the wedding shoot, his client forgot to bring the compensation, so Grzesiek asked his subcontractor if he can pay him later. He got pretty surprised when he heard “Chill, I work in IT now and I don’t really need more money ATM”. And something clicked! It was the perfect timing for him – he got motivated, and soon enough he found a 2-month course to begin his coding education, after which he joined us. And the rest is history…

Arts Degree in a software house? Not only when it comes to designers!

Jagoda started her journey studying graphic design at the Academy of Fine Arts. But funny enough, she is not our UX designer but a Social Media Manager.

Looking for her place in the world, she moved to Warsaw and jumped into one of the biggest film production companies in Poland that specialize in commercials. Three years of working as a production assistant and digital producer, spending hundreds of hours at dozens of film sets at the expense of her private life and passions made her realize, that it’s time to move on.

Later on, she became a Project Manager at the trendy graphic design studio, but she was still missing being more creative at her work. Meanwhile, she started to freelance as a Social Media Manager for restaurants. Marketing and social media became her thing, as it perfectly combines creativity with precision and planning. 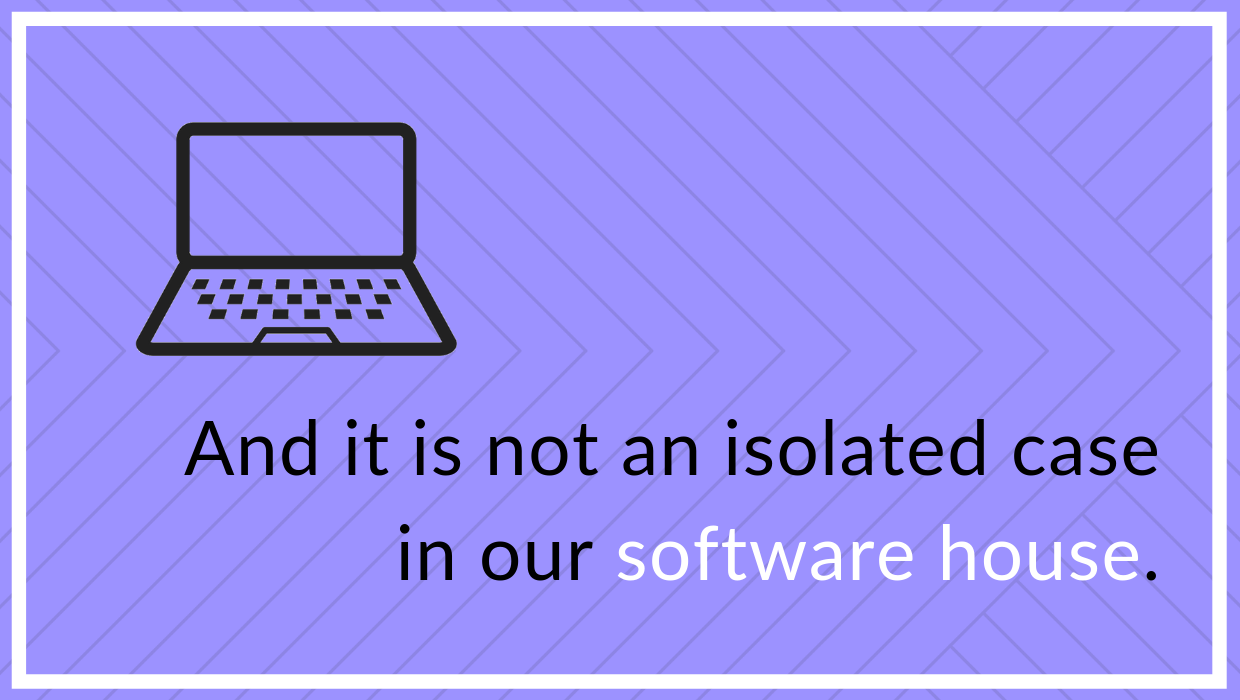 Bartek had a crazy journey, as he lived in England, Ireland, France, and Poland. His path to becoming a developer was even crazier than Grzesiek’s. Working on film sets as a propmaster assistant trainee spilling fake blood and swiping nails? Check! Serving food plates at Irish National Gallery? Check! Folding boxes for a British post office? Check! He was doing all crazy things, looking for his place in the world.

Finally, his passion for English (he has a worldwide respected certificate that lets him teach others) led him to create a Welsh and Irish version of a dictionary game called Boggle (like Scrabble, but faster). One thing led to another, and he started to learn to program to be able to fulfill his dream. But as it often happens, a journey can be more important than a final product so now Bartek is working as a Back-End Developer for the last eight years and a CTO in our company.

Italian on a hunt of inspiration

Andrea, our UI designer from Italy, studied accounting as a teenager. Soon enough, he realized that he’s not into economics and decided to become a designer. After finishing his education, he figured out that it would be nice to travel around the world, as he was always curious about how people live in other countries.
First stop – Australia! He was freelancing there as a designer but also worked as a bartender. After his visa expired, it was time for a new adventure – this time, it was Canada.

He lived there for a few months, also freelancing. Later on, he came back to Italy, where he stayed in Milan for a year. He worked for a company for a year, but the city did not grow on him. For a few months, he went back to his hometown, but soon he missed traveling around the world. And this time he chose Warsaw – he had a friend here, so it seemed a good place to move to. He has lived here for two years already, and since March, he has become a new bro at Asper Brothers. We hope that this time he’s gonna stay for longer!

From backpacker to software engineer

Paweł studied informatics at Lublin, but he confessed that he wasn’t that into it at first. He got an engineering degree, but he did it mostly because he felt his parents and society obligated him to get it. Not being sure what he wants to do, he started travelling through Europe to earn money. Belgium, Holland, England, Scotland, Sweden – you name it. He worked mostly as a physical worker at construction works and in warehouses. It took him six years to realize, that what he really needs is something involving intellectually, as he got bored so fast with his previous works.

He came back to Poland to reunite with his beloved girlfriends and figured out that he would like to train to become a developer. It took him a year of self-education and private lessons to dare to apply to a software house. And in August 2018, he became a Junior Front-End Developer. He found his way to be always intellectually challenged and found great co-workers that inspire him and not let him get bored.

At Asper Brothers, we’re aware that academic education is extremely important in a software company, but we also believe in people who can find the determination to create their own path. We willingly welcome people with various experiences, as it lets us think out of the box, which is also a great benefit for our clients.

If you want to work in an environment of professionals with various backgrounds, don’t hesitate and join us!

Did you like this story? Are you ready to join our office? Be our new Brother or Sister.

PHP is one of the most popular programming languages in the world. It is used in many computer science courses and...

Software development is one of the most important and profitable areas of business nowadays. With new apps and other types of...

Types of IT jobs - Plan Your Tech Career Path

When we think about working in tech, we tend to focus largely on software developers. But – even though they form the...