Technologies
Python Django Flask
Did you know that Python currently ranks as the most popular coding language in the world?

To anyone keeping track of trends in the IT world, this surely doesn’t come as a surprise. Especially given the popularity of two Python frameworks – Django and Flask – among global brands such as Instagram and Spotify, not to mention the thousands of AI and machine learning teams worldwide.

So, what makes these two frameworks so prolific in the developer community?

In the following post, we’ll take a closer look at what Django and Flask are. We’ll also discuss their key features and provide you with a concise Django vs. Flask comparison.

Hopefully, by the end of this post, you’ll be able to make an educated choice and decide which framework better suits your needs and expectations.

Django is an open-source, full-stack framework built-in 2003, created for internal purposes by two developers working at a newspaper. It was released publicly in 2005 and has been maintained by the non-profit Django Software Foundation since 2008.

As of 2018, over half (58%) of Python developers declared that Django was their favorite framework to work with. These numbers also reflect the market – Google, YouTube, and NASA are just some of the global players who use Django as part of their tech stack.

The official Python website describes Django as the “framework for perfectionists.” This is because it promotes clean, pragmatic design and helps build powerful web applications quickly.

It is also lauded for being easy to maintain, debug, and keep up-to-date. In fact, one of the distinguishing characteristics of Django is that it promotes an anti-redundancy approach, following the Don’t Repeat Yourself (DRY) principle.

If you’re interested in reading about how Django is structured, we highly recommend looking at this article on the Python website.

Flask is a slightly younger framework, founded in 2010 when Django was an already established staple among the Python community. However, Flask is a much more light-weight solution, even referring to it as a microframework. It doesn’t mean it’s not powerful, though!

Flask works based on Werkzeug, a utility library, and Jinja 2, a Python web template engine. In his post on Codementor.io, Python Developer Gareth Dwyer aptly describes the framework as “a bare-minimum, that leaves the bells and whistles to add-ons or the developer.”

For example, while Django offers out-of-the-box support for several databases (including SQLite, PostgreSQL, MySQL, and Oracle), Flask doesn’t foresee how data is stored. Instead, it leaves the decision to the development team, offering plenty of suitable libraries and extensions.

Now, this being said, let’s dig a bit deeper into how Flask compares to Django in key areas.

Django vs Flask – A Comparison of Python Frameworks

This needs to be looked at from several angles. Namely:

A popular notion among the Python community is that Flask is an easier framework to learn. Some even express the opinion that while your end goal might be to learn and use Django, it’s worth taking baby steps by starting with Flask.

Certainly, there’s a lot of truth to this statement. While Django is a super powerful framework many developers can’t imagine working without, it’s a jump into the deep end.

Setting up Django and understanding how it actually works can take much longer than if you run with Flask. Implementing Django means wrapping your head around the settings, installation, and understanding which feature is responsible for which action.

Now, on the other hand, once you understand all the intricacies of Django, you’ll quickly notice that its so-called ”batteries included” approach helps you automate a lot of work and save you time.

Another strong advantage of Django?

It offers an admin panel with a robust user interface, making managing all these various functions a breeze.

Though Flask is, in essence, a much simpler tool, it doesn’t mean that it lacks out-of-the-box features entirely. Flask comes with predetermined core features like URL routing, cookies, unit testing support, or error handling.

However, with this framework, you must put away time for deciding on things such as authentication and ORM (Object Relational Mapping), which come predefined in Django.

Now, depending on how you look at it, the customizability of Flask might either be a commodity or a hindrance.

If you want a solution that will give your team the liberty of choosing key features and tools, Flask should be your go-to framework. Otherwise, you might want to put in the initial effort to benefit from Django’s predefined functions.

Unlike Flask, Django comes with a predefined ORM, which supports several relational databases. These include, as mentioned before, MySQL, PostgreSQL, and SQLite.

Flask, on the other hand, does not impose any database type. For this reason, it’s trendy among teams that either has no database or work in a NoSQL approach.

If you want to read more about the types of libraries and extensions available for Flask, we highly recommend you take a look at a comprehensive breakdown by Michael Herman, Co-Founder of Real Python.

As mentioned before, Flask comes with only some predefined functionalities. In terms of security, these cover cookies, but you’ll need to take care of authentication, authorization, and password caching (among several others) yourself. This can be done, for instance, by using Flask-Security or a similar extension.

It’s worth remembering that this means security will depend on how safe the third-party solutions you choose are.

You can read more about this subject on the Pallets Project site.

The framework provides out-of-the-box protection, which gives you peace of mind from the very moment it is set up. However, bear in mind that if you use Django for a large codebase, there will be many security areas against attacks.

Whether you use Flask or Django, safety will never be an issue you can entirely delegate and forget about. In the end, let’s not forget that security breaches are among the top threats in tech globally.

Having read into the above Django vs. Flask comparison, have you already got a personal winner?

If you’re unsure whether a framework you’re leaning towards now will stand the test of time, remember that, in the end, Flask and Django are both rooted in Python. This means that they bare a lot of similarities, and changing from one framework to the other won’t need to be a painful process.

Is there any Django or Flask-related topic you’d like to read more about? Don’t hesitate to reach out!

Let us start with a question: Why is Python popular in software development? If you’re wondering why the language tops... 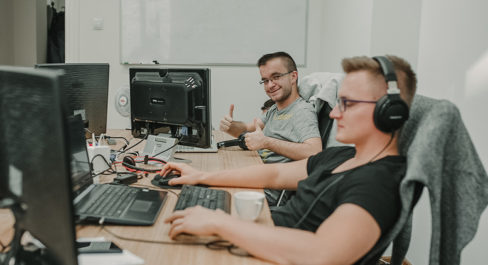 Could you imagine a world with self-driving cars or phones that can tell you out loud what the weather will...