This article is here to change it and focus on the place PoC should have in the software development process.

What is the Proof of Concept in Software Development?

Let’s start from scratch; that is from the definition. Merriam-Webster dictionary defines PoC as follows:

In fact, in software development, PoC’s job is to demonstrate the feasibility of both a product idea and a business plan connected with it. When done correctly, PoC development is the best way to avoid costly mistakes and attract investors. We will write more about it in the following sections.

From Concept to Product

All projects start from an idea or a concept, in other words.  Developing a PoC is the way to check if this particular idea can be translated into a real product. Let’s face it; every founder is convinced their idea is THE one that will change the world (or at least solve some real-life problem of the target audience). At the same time, most startups fail because they don’t solve the real problem of real people.

Another important issue is whether it’s physically possible to translate a particular concept into an actual product. Do you remember project Theranos? Their idea was impossible, but they failed to recognize it until it was too late.

Proof of Concept – the First Attempt at Building

This is why building proof of concept should be the first step to every disrupting digital product. It allows testing the business hypothesis without investing too much time, money, and effort.

Proof of concept should only have basic functionalities to illustrate the idea to potential users. Development costs should be kept to an absolute minimum. At this point, duct tape solutions are not only acceptable but welcomed. The goal is to test the idea in the real world and collect valuable feedback.

Proof of Concept is often the first stage of our clients’ product development. We combine work on PoC with workshops in a wide group. Thanks to this, the originator of a digital product has a chance to receive the first feedback and confront their idea with the opinion of specialists from many fields. Thanks to that, we can make necessary corrections at a very early stage. Paul Jackowski CEO, ASPER BROTHERS

Proof of Concept, Prototype, and MVP – What’s the Difference?

Wait a minute, you might say, isn’t it all about the MVP? Well… In software development services, the concept of an MVP received a very broad interpretation. There are many companies that call every attempt at validating a product idea an MVP. So, let’s have a look at the differences.

The Stages in Product Development

Even if you believe strongly in your idea and think you know its final shape, slow down. Developing your application according to the diagram above will help you avoid costly mistakes.

The perfect product development process should follow certain steps. You start from the general idea. Then, at the very beginning, you start developing a proof of concept. Once the PoC verifies the hypothesis and proves that the initial idea makes sense, you begin to work on the prototype. If prototype testing is successful, the next step is to develop an MVP that you can introduce to the market. And finally, after the ultimate round of feedback on your MVP, you’re ready for the launch of the final product.

The following paragraphs offer more details about each of the steps explaining the differences between them.

Proof of concept should be the very first step when building something big. It should be designed to demonstrate the unique features and functionalities of the software idea. Ideally, it should demonstrate its power to solve a particular problem of a target customer.

Proof of concept provides an answer to the simple yes/no question: “Is it possible to build this?”.  For the prototype, the question posed is: “How should we build it?”.

Once the concept is proven interesting and doable, it’s time to think about the ways to implement it. At this point, UX designers lead the project since users, and their interaction with the software product are of primary interest.

Prototype adds the second layer to the proof of concept. One can say that PoC is purely a backend team job, and the prototype tackles the frontend.

This is how we arrive at the well-known MVP concept. Generally speaking, an MVP can be seen as an advanced and polished prototype. It gives users the essential functionalities of the software product and presents them in a user-friendly way.

Unlike the prototype, an MVP is ready to be presented to the market. It’s the early version of your product.

The United States is the leading country by the number of startups (63,703) by a long shot. The second on the list is India, with just 8,301 startups, and the third spot is occupied by the UK, with 5,377 startups.

Insights the PoC should give you

We’ve tackled the definition of the proof of concept, but what are the advantages of developing it? In this section, we’re going to discuss insights you should get from your PoC (successful or not).

The first info you get from the PoC is a simple yes or no. Is the idea any good? Is it feasible? You will probably agree that it’s better to know the answer to those questions sooner than later. The software development team doesn’t work for free.

There is also something called “false values.” It’s when the software is developed on the false belief that there is a market for it. Creating a PoC and showing it to a selected group of future customers should protect you from this particular pitfall.

Even if things go south and the customers won’t find the software idea useful, there is a chance for a pivot at such an early stage.

Another vital insight you get from developing a PoC is the know-how. Working on the proof of concept is the time to research different technologies to determine the most suitable one to implement the idea.  Knowing the technical solution you want to use makes finding the development team a lot easier.

When you know how to implement your idea, you can accurately plan your budget and allocate resources. Understanding the technology and possible challenges on the way to implement essential functionalities lets you approach budgeting in a more conscious way. You can make informed decisions on which corners to cut.

The worst-case scenario where customers decline the need for the original idea doesn’t have to mean the project is dead and buried. Project managers can still gather feedback from the users and work on the pivot. Sometimes the success doesn’t come immediately, but it doesn’t mean it’s smaller.

5 steps to a good Proof of Concept

The first step to creating a good proof of concept is finding the target audience. Brainstorm on the market you wish to enter. Define your ideal customer. Think of the ways they are going to use your solutions. State the problem you want to solve. Remember you wish to offer your customers a useful tool.

When you note all of this down and have a clear picture of who you want to target, take a look at your competitors. Let them be your example of what can be done to address the right people. Analyze the strengths and weaknesses of their products, websites, and communication. Draw conclusions on how you can stand out.

When you know what pain points you want to address, it’s time to work on solutions. Examine the time and budget, and other possible constraints.

Think about the technologies needed to complete the project. Remember that the proof of concept is just the beginning of software development, so choose your technical partners wisely.

There is one more thing to remember at this stage. To make developing a proof of concept successful, you need to take extra care about documentation. Write down everything for future reference. Software development is an iterative process; you might need to revisit the documentation a lot.

When you know your target audience and clearly define your software idea, it’s time to create some code. At this point, remember to focus on the specific process you want to address. Cut down features and focus on one key functionality.

At the end of this stage, you need something that you can test. Prepare wireframes to illustrate the interface and design. A mockup, on the other hand, is a static way to present functionalities. Together they should convey the idea of your future product.

Use them for testing, and, later on, present them to the stakeholders to gain their feedback.

As soon as you have your PoC ready, it’s time to test it with the users. After all, the whole idea to create a proof of concept in software is about testing ideas with real people. Don’t hesitate to ask people’s opinions on your product. This will help you determine if you’re going in the right direction. Creating a proof of concept that’s poorly tested won’t help you achieve your goals.

Even once you have created a final PoC, or even an entire product – the road of continuous improvement is never-ending. Development is the key. / source: hacktica.com

After extensive testing, collect and record (!) users’ feedback. Make good use of it. Fix issues they mention. Ask them for suggestions. The more you learn from your future users, the greater are your chances for success after the launch.

If the feedback suggests some significant adjustments are necessary, consider developing another proof of concept. It’s better to spend some more time and money on this than to fail later.

Tools to Help with Your PoC

Creating a proof of concept in software is not different from working on a regular software development project (apart from a considerably shorter timeline). Hence, the tools you need are the same tools used for project management daily. You can pick Jira, Asana, or even Miro or Trello if you prefer to have more visuals.

It’s crucial to keep extensive documentation. Again, no matter which solution you choose, it’s important that everyone can check and reference documents whenever they feel such need. Google Suite, Microsoft Office, Hubspot are equally good.

Proof of concept in software development is the best approach when testing revolutionary ideas. It helps to save time, money, and effort and allows to only work on proven ideas. We feel that the PoC approach might be a solution to the main startup problem: a lack of product-market fit.

Need to develop a digital product?

A Minimum Viable Product (MVP) is a concept that originated in the startup world and is now used by companies of... 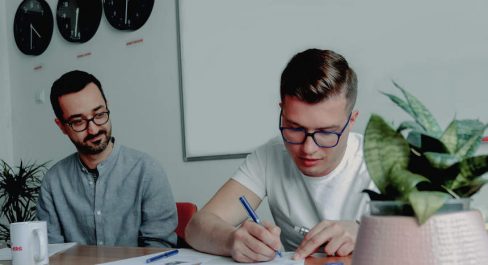 In this article, we will go into the details of what a discovery workshop is, what are its main goals, who...

Scoping workshop provides an excellent opportunity to clarify the needs of the project, disclose areas that haven't been considered earlier...